As kids growing up in the backwoods of Quebec in the mid-20th century, my siblings and I had somewhat limited exposure to our immediate relatives. We'd usually connect with our Ontario Aunts, Uncles, and cousins once every year or two, and with our Grandmother only slightly more often.

Our grandmother (Maude) was our only living grandparent, and lived several hundred miles away in Montreal, with her brother Les. When Grandma Mom decided to visit, it was Les who would do the driving. Maude and Les were born in England at the end of the 19th century and emigrated to Canada with their mother and two other siblings in 1913. In spite of the length of time they had lived here, the two of them retained their English "properness", and occasional "wackiness", throughout their entire lives.

Les was a fascinating character in every sense of the word. He would often go for a morning walk wearing a pair of gray wool dress slacks, held up with a pair of suspenders over a sleeveless undershirt covering his somewhat largish paunch (no shirt), his favourite white fedora, and a pair of nice plaid slippers; it was quite a sight. He was also quite a brilliant man in so many ways. He could often be found in his basement workshop crafting a variety of gadgets and gizmos. For a time as a young man he was a concert violinist, and reportedly once played in Carnegie Hall. He was also ambidextrous and could write with both hands at the same time, with the left hand producing a mirror image of the right. But to us he was just "Uncle Les".
So what does ANY of that have to do with my collection of writing equipment?
Well, as one can guess from the above, Les was a curious man at heart and in his own way he helped to instill that same sense of curiosity in us kids. He happily spent hours chatting with us, and whenever we'd share some nugget of what we believed to be childhood brilliance with him, he'd turn to our grandmother and say "Well waddya know Maude?" (likely with an accompanying quick wink). It was always said with sincerity, and never in a mocking or condescending way. It was his way of encouraging all of us as we discovered our world for ourselves.
My family has now had to live with my own use of that phrase for decades, whenever even the smallest snippet of a new discovery or fun fact passed through our lives. Over the past few weeks I've been revisiting some of my previous blog entries, along with their associated items from the collection, and what follows are a few of the fun facty entries I re-read that evoked a whispered "well, whaddya know, Maude" ...
There are porcupines out there with quills that are over 30cm long - really! - A Prickly Business
Pencil makers acquired actual battlefield relics (bullets) to factory produce souvenir pencils - War Related Pencils
The curious evolution of Lord Stanhope's one piece microscope - Instant Success Takes Time
From a vine, high in the canopy of an equatorial rainforest, to a pencil factory in New York, to the wall of my office - Bean There, Done That
When some pencil case makers helped others weather the storm during a major depression - Hard Times in the U.S.A. 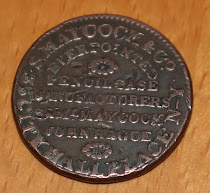 No matter one's interests, curiosity is what drives us to find out more, to question, to explore, to enjoy. Uncle Les helped me find countless "Well, whaddya know, Maude?" moments throughout my life and through my various collecting interests, and I'm now looking forward to discovering tomorrow's...