It just sounds so much nicer when said in French rather than the English, "Snail Inkwells", doesn't it? In fact, it was the use of that French phrase in the seller's description that caught my eye with the first snail inkwell that I purchased.

The design is believed to have originated in France in the mid-1800's, and then in the latter half of the 19th century a number of American makers began producing them. The French versions all seem to be porcelain, while the American versions were often clear glass or milk glass, although the odd coloured glass version shows up.

The simple logic behind the design is quite clever; when the "snail" is in the forward position the ink is accessible, and in order to reduce evaporation when not in use, you roll the "snail" upwards against a flat plate that covers the opening.

I currently only have two snails in my collections (both French, I believe) but I'm pretty sure I could find room for a couple more if the opportunity presents itself. 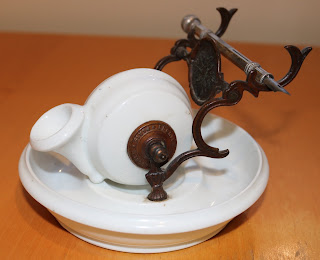 This was the first one I purchased. It is a nice clean white porcelain inkwell. The brass medallions on either side read "Encrier Bascule Paris J.L.". "Bascule Encrier" translates to "Rocker Inkwell"; I suspect that "J.L." are the maker's initials but I have yet to be able to confirm this. 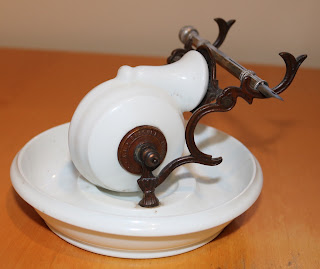 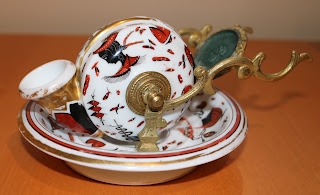 This second one has a really great design which I suspect dates to the 1920's or perhaps a little earlier. It seems to have a lot of symbolism but nothing that I recognize from anywhere else. It is also porcelain, and probably french-made as well. 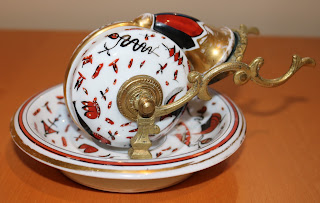 The following are a few examples from my wish list. I would like to obtain an example of a double or triple snail inkwell, and the final image is of an all metal version that I have only seen two of (and neither one was for sale) but I am intrigued by the "Mad Max" look of it and would love to find one for the collection. 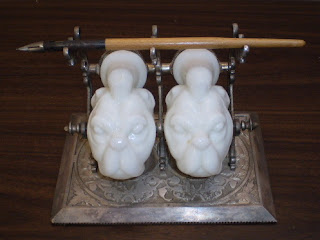 This double one has been made out of milk glass with the "snails" being molded into dog faces. Likely american made (they tended to have heavy metal bases on most of them). 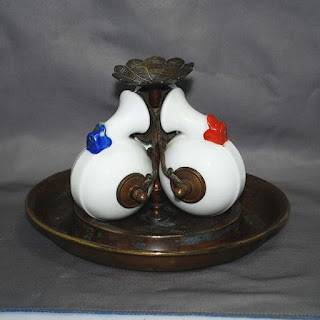 Although not obvious from the photo, this is a rare triple snail inkwell. White porcelain and of french origin. 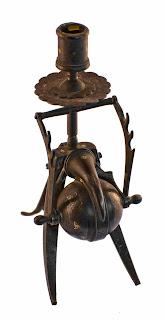 This one is rather odd in that it appears to be all metal, including the "snail" part of the inkwell. It has a built-in candle holder in addition to the penholder. The extremely upright & compact design, including the rear hinged leg, suggests that it was perhaps intended for travel?
at March 22, 2018 2 comments:

When I first began collecting mechanical pencils I tried to limit my acquisitions to items that matched those keywords - "mechanical pencil". However, items that didn't quite fit that definition gradually began creeping into the collection. Sometimes sellers would list the items as "pencils" and once received I'd discover them to be more than they first appeared. At other times there would be something about the images of the item that provided a clue (e.g. a patent date, or a missing slider where one would normally be, or two sliders when only one should be present). And on far too many other occasions, the item would just be too cool to pass up.

And now? Well, now I just accept the risks associated with seeking out interesting examples from the victorian pencil world, and I continue to be pleasantly surprised when the next "not-just-another-pencil" shows up in the mail.

Of course, playing pencil roulette doesn't always turn out to be a win, but like most gambling addicts I prefer to maintain my focus on the positive aspects and excitement of the ones that are wins, while quietly disposing of the detritus resulting from the losses!

Here are a few of the more interesting "wins" that have come my way ...

Jacob Lownds Pencil (1836) - This beauty was rather sad looking when I first saw it posted for sale many years ago. It was listed on an auction site as 'not working". It was almost black with dirt, it appeared to be missing its slider, and the seller indicated that the pencil was "stuck". But it was also listed at a ridiculously low price and something about it said "take a chance" so I did. It cleaned up nicely and works just fine. There never was a slider because the design never required one. There is no maker's mark on it, however, there was only one maker that I've come across that was using this design in the 1830's. Jacob Lownds filed his patent, (U.S. patent #32) in 1836. The pencil tip extends by pulling the top of the barrel, giving it a quarter turn, and then pushing it forward. Reverse the process to bring the tip back into the barrel. The etched design on the barrel only became clearly visible once I did a little cleaning. It is 3.5" (9cm) closed, and 4.75" (12cm) when extended.

W.S. Hicks Combo Pencil & Dip Pen (1867) - I've acquired two of these over the years and both were originally listed for sale as pencils. I had owned the first one for years, and at some point I had looked more closely at the patent details associated with the date on the barrel, "Pat.Dec.24.1867", and determined that I had something more than just a nice Hicks pencil. So when a second one came along, also listed as a pencil... I just had to buy it as well.

A gentleman by the name of Richard Ryne had filed U.S. patent #72,684 on that date and he assigned the patent to W.S. Hicks. There is a second cartouche on the barrel, on which I can make out a very faint "...0 '58". This corresponds to A.G. Days standard patent imprint "AG Days Pat Aug 10 '58". Days marketed an "improved" version of the Goodyear BHR.

John Sheldon - "Unique Pocket Companion" (c.1842) - This was one of the first "more than just a pencil" purchases that I made many years ago and it is by far my best pot luck win, thanks mostly to my own curiousity as a novice collector. The seller had listed it as a silver victorian pencil/pen combo, engraved with the owner's name. I normally stay away from engraved items but this one was listed as silver, seemed to be in good condition, and I liked the look of the "split" slider for extending the pen/pencil, which I hadn't seen before. When it arrived I realized that what the seller had indicated was an engraved owner's name was actually an imprint of the maker's name - John Sheldon, and that what I had just purchased was an example of John Sheldon's "Unique Pocket Companion", made in Birmingham, U.K., and marketed in the 1840's as a complete "Magnum in Parvo" ("Much in a Small Space").

In total, the Sheldon includes an amazing 8 functions - pen, pencil, toothpick, sovereign gauge, letter balance (to determine postage due), seal, lead reservoir, and simple measurer (barrel is 4" long and it is divided exactly in the middle). Oh, and the seller had the item's casing material wrong as well - it wasn't silver; Sheldon made most of his pocket companion's in what is known as German silver, or nickel silver (copper, nickel, zinc), and it has no silver in it at all. This allowed Sheldon to produce complex writing tools and sell them at affordable prices. In addition, being harder than silver, the material ensured that the tool would hold up well under regular use. A rare find, although I have been able to acquire one other Sheldon more recently. 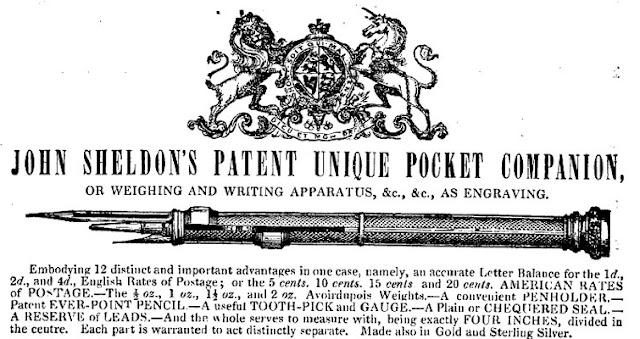 When was the last time (if ever) that you heard those words?

Well, back in the day it was a pretty common alternative to today's "cya", "ttyl", "pm me", or "later dude...". Families and friends didn't have the opportunity to get together often and anyone travelling could expect to be gone for some time as the options to get from point A to point B would have been rather limited... and no planes, cars, phones, etc.

For the travellers of the late 19th and early 20th centuries, keeping in touch while on a journey meant ensuring that you packed something like this for your trip...

A fairly compact writing companion that included pretty much everything you'd need (other than the writing paper) to let mom and dad know that you had arrived at your destination, and were a-ok. You could just scribble out your news, put it in the mail, and just like that... a few weeks or months later they'd receive it. 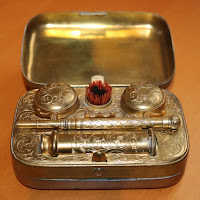 Some of these travelling sets were very basic and consisted of just the sealed ink container, with pens, etc. carried separately. This one includes a great deal more. It has two sealed ink reservoirs, allowing for two different colours of ink, or twice as much of your favourite colour, a small pen wipe, a flip-up candle, a pen rest, and a reversible pen/pencil combo to complete the set. 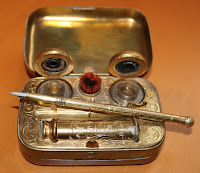 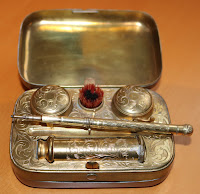 This one was Austrian made ("K.K. Priv." stamped on the pen rests) sometime around the end of the 19th century. The interior is nicely patterned stamped brass and the exterior is leather, with a brass band around the middle. Its dimensions are 4.75" x 3.0" x 1.75" (12.5cm x 8.0cm x 4.5cm). The original reversible pen/pencil was not present when I purchased it (if there ever was one), and this is one that I had obtained separately (no maker's mark).
at March 01, 2018 1 comment: