As long as there has been human conflict, there have also been those that collect memorabilia associated with those conflicts. With the passage of time these items move into the open market and their historical value begins to supercede the more personal, sentimental value held by their original owners. In my case, the conflict memorabilia of interest are pencils, of course, and here are a few...

"Remember Gordon" - In 1884, British General Charles Gordon was sent to Khartoum, Sudan to organize the peaceful evacuation of Egyptian garrisons. In the process Gordon managed to stir the pot with the Mahdist Sudanese rebels, resulting in the "Siege of Khartoum" and Gordon's death.

In 1886, General Herbert Kitchener was sent to Sudan to avenge Gordon's death, culminating in the "Battle of Omdurman" in 1898 (Among Kitchener's troops during the battle was a very young Lieutenant Winston Churchill).

The "Khartoum" Pencil was made from spent rifle cartridges gathered from the actual battle site.

The maker was likely Sampson Mordan, but the exclusive rights to sell the pencil were held by Mappin Brothers, London, with 10% of sales to be directed to the Gordon Memorial College of Khartoum. My example has the stirrup watch chain loop which was an option at the time of original purchase. The worn condition of the loop suggests that this was a prized possession that hung from the owner's watch chain for quite some time.

Like the Khartoum pencil above, it is made from a battlefield relic. The cartridge is a 303 Mark II, the standard British Army bullet at the time. The pencil itself is silver and simply inserts into the shell casing. It is stamped "War Souvenir South Africa".

Princess Mary's "Sailors' and Soldiers' Fund" was created and funds were raised through a public appeal. Over the next several years more than 2.6 million "Princess Mary Tins" and their contents were manufactured, assembled, and distributed to soldiers wherever they were serving. The contents of each box varied by rank, ethnic background of the soldier, gender, smoker/non-smoker, etc. Included in each box was a small bullet shaped pencil. The pencil casing was fashioned out of brass but was not an actual bullet casing. It was stamped with the Princess Mary Monogram. The small wooden pencil was held by a sterling silver "bullet tip".

World War II - The most recent pencil I have that is war related is from World War II. It is in the shape of a torpedo, complete with two tiny brass propellors. It is believed to have been made by A.T. Cross Company (makers of Cross pens, among other things). During WWII the Cross company apparently made brass propellors for torpedoes to aid in the war effort and the pencil may have been made as a souvenir.

I'm sure that there are many other war related pencils I have yet to discover. That said, I'm also sure that none will be associated with a story quite as positive as that of Princess Mary. Her simple act of charity and kindness endeared her to millions of soldiers and sailors serving during the First World War, and to millions of citizens throughout the U.K. and the Commonwealth.

While sloped writing surfaces of various forms have been around for many centuries, the flat surfaced rectangular writing box really only became widely available towards the end of the 18th century. They were extremely popular through the Victorian era but their usage had mostly ended by the beginning of the 20th century.

The main reasons for their development and rapid adoption by the population... literacy was on the rise, along with growing interest in travel. Increasing numbers of travellers meant more people wanting to diarize their adventures, compose letters back home, sketch where they've been, etc. To do any of these required access to quills or dip pens, paper, ink, seals, sealing wax, and a secure container to transport it all in... the answer was the writing box, the 19th century's version of today's laptop!

Writing boxes were very personal items and they were intended to be portable. They were not designed to be a piece of furniture that simply sat on a desk in one's home. While many were built with brass trim along the edges and corners to help protect the box during its travels, transportation methods of the day meant that they would not have an easy life even with the brass protection. Their often scarred casings are a pleasing reminder of how well-traveled they and their owners were. Writing boxes came in a variety of sizes, designs, and complexity, to meet the varied demands of those using them. While I think of my writing box as a well-designed and beautifully crafted piece, it probably would have been considered a fairly basic model in its day.

In our ergonomically driven modern world of furniture design, having the writing surface at a slight angle is believed to reduce the strain on one's neck and back. However, apparently the reason that writing boxes (and writing stands/desks before that) were sloped had little to do with ergonomics. The principle writing tools prior to the introduction of the first mass produced fountain pens in the late 19th century were the quill, and the dip pen (and the pencil, of course!). By angling the writing surface, when the quill or dip pen is held it is then close to being perpendicular to the writing surface, thus allowing the ink to flow more readily. 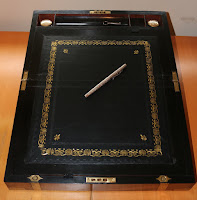 This box was purchased from a couple in the U.K. that do beautiful work restoring victorian writing boxes. It is 15.75 inches by 9.75 inches by 6.75 inches high. The wood is likely a walnut veneer, with a solid mahogany interior. The original lock & key are present and the top surface mounted brass cartouche is vacant.

On the inside, there is a completely new leather writing surface. 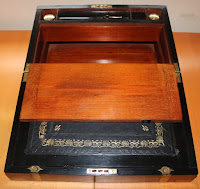 The upper area is recessed and is divided to allow for two ink bottles (in case one needs a couple of colours of ink, or wants to ensure an ample ink supply for the entire journey), as well as sections for pens & nibs. Lifting the top half of the leathered section reveals a generous storage area and by gently pulling on one of the dividers of the recessed area one side of this inner compartment pops open to reveal two secret drawers (I wonder what secrets these tiny drawers have held over the years?).

The bottom half of the leathered section is opened by releasing the two small brass lock tabs and this area nicely holds all the stationery one might need.

I didn't buy this piece specifically as a collection item but I wanted to have a victorian writing slope so that I could more fully enjoy the simple act of writing. What I intended to write about was inconsequential; the mere act of putting pen & ink to paper can be relaxing and almost therapeutic. Try it sometime... close up that laptop, put away the iPad, stop poking out communiques on your phone one letter at a time. Grab a pen and some scrap paper and write something, anything, and before you know it you may be looking for your own Victorian writing box!

Sampson Mordan, along with his partner John Isaac Hawkins, are credited with patenting the first mechanical pencil in 1822. Mordan pencils are widely sought after by collectors, as are many of his other unique "objets de vertu" such as figural pin cushions, menu holders, perfume (scent) bottles, and vestas. A simple eBay search will show dozens of Mordan items, many in pristine condition, with most Mordan items drawing significant bidding interest, and significant selling prices.

One writing related Mordan item that rarely shows up are travel inkwells, and I consider myself fortunate to have three Mordan travel inkwells in my collection at the present. The oldest is a small rosewood inkwell that dates to around 1845. It is just 1.25" in diameter and 2.25" high. 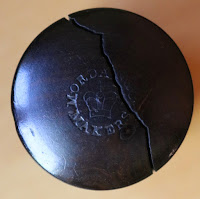 The cap is embossed with a crown (indicating that Letters Patent had been granted), along with the maker's mark "Mordan & Co. Makers". Mordan used this maker's mark between 1845 & 1852. The lid is secured with a bayonet style (twist lock) rather than the more common threaded screw style.

Wood isn't the wisest option for holding water-based liquids such as ink. The expansion and contraction of the wood while the inkwell is filled, or sitting empty, eventually results in cracking. That is likely what caused the lid on this one to split, 100 or more years ago.

The fact that it has survived for over 170 years is due to the owner taking the time to "fix" it with a wire wrap at the base of the lid. While not a professional restoration by any stretch, it would have allowed the owner to continue to use the inkwell, as most were simply thrown away. 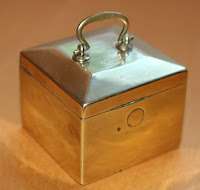 This brass travel inkwell by Mordan would have been made around 1860-1880. It is 2" square and 1.5" high. On the front of the inkwell there is a simple push button release for the lid. 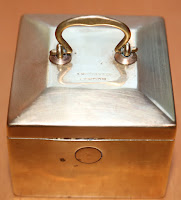 The top of the inkwell has a small hinged brass handle, as well as the imprint "S. Mordan & Co. London".

The interior of the inkwell, also brass, is quite plain, with a simple beaded brass ring surrounding the original glass liner. The original rubber or cork seal for the ink bottle is no longer present; not uncommon as these would wear out from use. 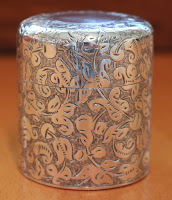 The newest Mordan travel inkwell in the collection is sterling silver and dates to 1902. It is 1.75" in diameter and 2" high. It has the same bayonet style lock mechanism for the lid as the rosewood inkwell. It is fully hallmarked London, 1902, with the maker's mark SM & Co. 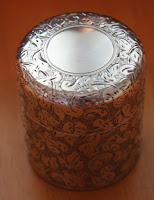 While there is a tiny bit of ink residue in the inner ink bottle, the overall condition suggests that it has spent most of its 115 year life devoid of ink and simply sat on display or was tucked away as a special piece. The cartouche on the lid is blank and there are no dents or dings in the beautifully hand engraved casing.

Travel inkwells were designed to be leak-proof, allowing a supply of ink to be taken along on one's travels. Growing literacy levels, combined with the development of the rail system in the latter half of the 19th century, resulted in greater interest in travel. Makers of travel inkwells created a wide variety of designs, some more decorative than functional, to meet the demand. 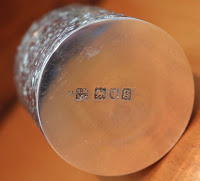 As the 19th century drew to a close, two major technological advances in writing equipment sounded the death knell for the travel inkwell - the typewriter (1870's) and the fountain pen (1880's).