One of the rarer pencils in my collection is this "Dawson's Patent" pencil, pen, and stamp dispenser combination.

The early-to-mid 1800's experienced an explosion of new inventions for all manner of gadgets and gizmos to help improve & enhance the Victorian lifestyle. Demonstrating Great Britain's industrial superiority to the rest of the world was one of the prime objectives of "The Great Exhibition" of 1851 in London. Listed among the exhibitors were two of the major pencil-case makers of the day, London's own Sampson Mordan (run by his sons Augustus and Sampson II since Sampson's death in 1843), and Birmingham maker, John Sheldon (whose inventions included a variety of amazing and ingenious combination pencils & pen holders). Thomas Dawson, Engineer and Inventor, was from King's Arms Yard in London. He was likely one of the over 6,000,000 visitors to The Great Exhibition, and if so, he certainly would have been drawn to the Mordan and Sheldon exhibits at some point.

Thomas was no slouch when it came to creativity and inventions. In 1854, he filed a patent for "Improvements in Umbrellas and Parasols",Patent #513. On July 26, 1855, he filed Patent # 1702, "Improvements in bed-steads, couches, and other like articles of furniture, whereby parts thereof can be made to form a fire-escape when required." 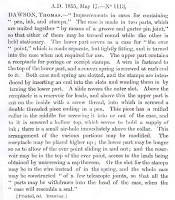 Dawson's Patent pencil is made from nickel silver, just as the Sheldon pencils of the day were. It is also multi-functional, as Sheldon's were. Nickel silver is a copper alloy that also contains nickel and zinc in smaller quantities. There is no silver in nickel silver; the name simply refers to its silver appearance. The use of nickel silver allowed them to be made (and sold) much more cheaply than, say, a Mordan pencil, and yet they still looked quite similar to real silver. The pencil was 4" in length when closed and the finial holds a nicely cut and polished agate. In addition to the pencil and pen components, what made his combination pencil/pen special was the built-in stamp dispenser hidden within the upper barrel. 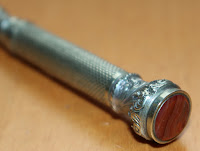 So why the stamp dispenser? Well, my thinking is that he was well aware of John Sheldon's special "Patent Unique Pocket Companions", which were quite well known. They had been around since being patented in 1842 (RD 1086, Feb, 1842), and he very likely saw them on display at The Great Exhibition. As an inventor, he would have known that he had to come up with something different in order to be competitive.

Prior to 1854, stamps were purchased in solid sheets and one would cut them apart with scissors as needed. The introduction of perforated stamps for public use only came in January, 1854. The Dawson's Patent pencil, which became available to the public about a year and a half later, allowed one to make a roll of several perforated stamps, place it in the upper barrel and then extract them one at a time, as needed. New stamps from The Royal Mail service, and a pocket companion to dispense them as needed; who wouldn't want one! The image below shows the various components that make up the pencil.

With such a creative mind, and with a number of useful patents to his credit, one would assume that Thomas went on to do more great things. Sadly, it appears that may not have been the case. In January, 1857 Thomas Dawson was likely in debtors prison. The London Gazette of January, 2, 1857 lists those in front of the "Court for Relief of Insolvent Debtors" and the list includes Thomas Dawson, of King's Arms Yard. The failure of Thomas' business may help to partially explain the rarity of the pencil as they were only made for a very short period of time, and perhaps the novelty of the pencil just never caught on. To date I have been unable to find any further information on whether Thomas was able to get back on his feet at some point after 1857, but I hope he did.

This was not the first pencil in my collection; nor is it the oldest, the most valuable, the rarest, or the most interesting. But like many of the things that we humans collect, it is the story behind the little red pencil that makes it special to me, and the focus of my first blog entry.

My grandmother once owned this pencil, but exactly how it came into her possession we'll never know. She was likely only a small child when it was made (she was born in England in 1898) so it may have even belonged to her mother, or perhaps it was purchased while she was still a young woman.

The entire pencil is a mere 1 1/8" long when closed and in its casing. Fully extended it doubles in length, to a whopping 2.25".

The outside casing is finished in a red guilloché enamel while the pencil itself and the casing trim are plated rose gold. This "pleasing to the eye" effect is achieved by first engraving a repeating pattern into the barrel (think Spirograph) and then covering it with a transparent red enamel. Guilloché enamelled items were very popular at the end of the 19th century and early 20th century. High end jewellers including Fabergé, Cartier, and Tiffany, all sold a wide variety of guilloché enamel items, although it is probably the famous Fabergé eggs that first come to mind. Many other manufacturers created items in the same style and pencil makers were no exception. One only needs to google "guilloche enamel pencil image" to realize the broad range of designs and colours that were created and offered for sale to the buying public.

There is no maker's name or marking on the pencil, but items like it would likely have been sold in mid-range jewellery stores. The rose gold plating on this one is showing signs of significant wear, but the enamelling is near perfect, and the pencil mechanism is fully functional. The pencil automatically extends as it is withdrawn from the casing, and the lead advance works fine. During the time that Grandma wore this pencil she had it suspended from a small gold chain around her neck. It was a piece of jewellery with a purpose and its current condition shows that it was used, and enjoyed, and not hidden away in a drawer only to be brought out on special occasions.
at May 09, 2017 1 comment: