For me, one of the great joys in being a collector has been the learning opportunity that accompanies each and every acquisition. The knowledge so graciously shared by other collectors and experts has been invaluable as the collection grows along with my own expertise. However, I'm also guilty of being a slow learner on occasion, only advancing my knowledge as a result of the poor outcome of a particularly risky decision that I've made (usually pertaining to the actual condition of an item vs. the seller's overly inflated opinion of the "treasure" they're selling). While I have made my share of bad decisions over the years, only recently has the additional spectre of fakery & fraud crept into my current sphere of collecting.

Stories of fakes or frauds in the collecting world are not unusual, but I would never have thought that anyone would actually find it to be a worthwhile endeavour to create fake antique pen (nib) boxes and sell them as "sealed" (unopened) pen boxes... until now.

Some antique pen boxes are quite rare and can sell for significant sums of money, but the average box, including most, or all, of the original pens within, generally sells in the $20-$50 range. This is hardly the kind of financial return one might hope for when undertaking a completely illegal counterfeiting effort that consists of making replica boxes, and then filling them with actual vintage pen nibs (just not nibs that match the label on the box!). There is also the reality that pen box collecting is not exactly considered to be a major market opportunity. But apparently there are some folks out there that disagree, and I recently became aware of this type of fraud with my own collection.

I've been acquiring pen boxes for less than a year, and I consider myself to be a complete neophyte in terms of knowledge in this particular area (an earlier blog entry talked about a few of my early acquisitions - https://yorewrite.blogspot.com/2018/08/well-well-if-it-isnt-his-nibs.html).

So I was quite excited when I came across a posting in a collectors' forum offering a large number of vintage dip pen nib boxes and their contents for sale. The poster is well known as a writing equipment collector/dealer and these boxes had been part of a much larger acquisition. The poster's expertise and collecting interests do not include pen boxes so they decided to dispose of the boxes as a lot. This was a great opportunity for me to increase my pen box collection so I reached out to try and negotiate a purchase.

The only problem was that the seller had also just become aware that several of the boxes were fake. They very openly, and honestly, pointed this out to me after they'd opened a couple of the sealed boxes and discovered a range of less valuable mixed pen nibs inside that did not match the box labels. While the fakes resulted in several of the boxes now having no value, most of the lot was genuine. So, an acceptable price was agreed to and a package containing over 20 pen boxes from 3 different countries, over half a dozen different pen makers, and the efforts of one fraudster, arrived a couple of weeks later.

Now one might rightfully wonder what would possibly motivate someone (me) into buying fakes, knowing full well that they are fakes? The answer is simple really ... to learn.

Here was an opportunity for me to significantly reduce the potential cost of this particular learning experience as I already knew that several of the boxes were fake! If you need to, re-read that sentence; there is sound logic in there somewhere, I'm certain of it!

I regularly sell & trade items from my collection so that I can acquire other items that are of interest or simply to do a little "culling of the herd". Expanding my knowledge to include some of the bad stuff enables me to not only make the best acquisition decisions that I can, but also allows me to be as honest as possible when I present items for sale or trade.

What will happen with these particular items? Well, the fake boxes have been segregated and marked as fakes so that they can't be re-sold. Their contents (over 1,000 pen nibs) will gradually be sorted. I've already found several rarer pens among them, which raises another question as to why someone would fill fake boxes (that the experts can generally tell are fake without even opening the box) with a mix of pens that might actually have some value on their own. I may keep a few of the more interesting pens and then sell of the remainder to other collectors, calligraphers, or anyone that may be looking for a few hundred random vintage dip pen nibs.

So did I learn anything? Well I'd like to think so. The information provided by the experts and collectors within the online groups has been invaluable and I've expanded my awareness of the world of fakes. The individual that I interacted with in this transaction was extremely open and honest throughout the discussion, and what I received exactly matched what had been described to me (the good and the bad!). It is also a reminder that it's always ok to ask questions; there may be fraudsters out there, but there are also a lot of experts and experienced collectors that are are more than willing to help educate those of us that are still on the steeper side of the learning curve.

Most importantly, the good half of the acquisition has allowed me to significantly expand my collection of pen boxes and their contents and now I need to prepare the next drawer in the cabinet for their safe keeping ..... 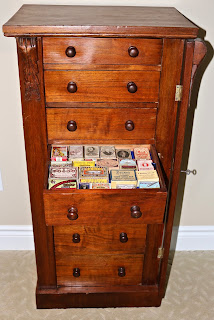