So what could possibly have been of such value during the 17th to early 19th centuries that one might risk virtually everything to attain just a few pounds of it? Those found guilty of stealing it, or of possessing it illegally, could be punished with either a whipping & one year's hard labour, or with a 7 year sentence to be transported to the colonies. One of the notorious characters of the day - "Black Sal", was known for her thievery & smuggling of it, and she reportedly was eventually hunted down and killed by wolfhounds owned by one of her victims.

This near priceless material went by many different names - wad, plumbago, black cawke, black lead, and is more commonly known today simply as graphite. It may seem a little odd that good old pencil lead was once held in such high regard, however, there was a time when it was quite scarce, and only available in its native mineral form. The mining and distribution of graphite was quite tightly controlled. At a time when the annual wage for a labourer was approximately £12, a few hundred pounds of pure graphite could make one a fairly wealthy man, with prices reaching as high as £1,300 a ton at one point. Some of the best, and purest, graphite in the world came from the Borrowdale Mine, located in the historic county of Cumberland (now part of Cumbria).

Then, thanks to the French Revolutionary Wars taking place at the end of the 18th century, and the embargos placed upon France at the time, France found itself facing a severe shortage of pencils. The situation was so dire that one of France's Ministers of War, Lazare Carnot, took on the responsibility of finding a solution. He approached one of the army's bright young officers, Nicholas-Jacques Conte, to request his help in resolving the problem. According to legend, Conte came up with  a solution in a mere 8 days. By mixing powdered graphite with clay and then heating it in a kiln, he developed an approach for making different "hardnesses" of pencil leads that is still used today.

Back in England, the demand for the purity of Cumberland lead carried on well into the 19th century, with pencil-makers demanding more and more of the rare commodity. An excerpt from Volume I of the 1839 edition of "The Art Union" describes the situation, and explains why some continued to favour the pure Cumberland lead - "...a most inconvenient mode of supplying the ore to the pencil makers has long prevailed. The mines are opened and worked for a short time, about once a year, or sometimes two years, depending upon the consumption by the Public; the mine is then sealed, and the ore raised sent to London to the owners warehouses; where, once a month, a sale is held, and the purchasers go and select the ore at so much per pound; when this is consumed, if more be required before the day of periodic sale, upon payment of a very heavy fee a large purchaser may get a fresh supply, but it is only of the rejected of the former sale, for there is no fresh supply from the mine until all the stock is sold. The consequence is, that the best pencils are only to be had out of the first selections; from this time they become worse and worse until a fresh supply arrives - of pure Cumberland lead. The largest consumers are now Mordan & Co., and nothing can exceed the care and skill of their selection, and the beautiful machinery with which their pencils are made, so as to ensure the lead of equal size and quality, and perfectly central in the cedar; thin small points too, for the ever-pointed pencils, are made by the most accurate machinery; the advantage of using the native black lead over the common compositions is in the depth and richness of its colour; the pure native ore has often hard particles in it, and these the more frequent as the stock is again and again looked over; but the composition pencils, though sometimes free from this defect, never attain the firmness and richness of the pure Cumberland lead." (author unknown - initials "A.B.")

Here are a few examples of pencil leads & boxes from my collection : 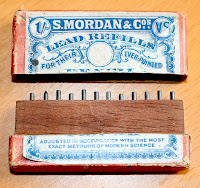 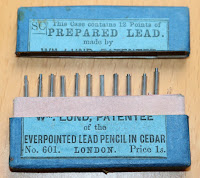 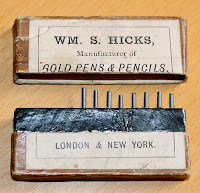 Background on Borrowdale Mine - Industrial History of Cumbria

Travelling inkwells of the late 1800's took on many forms; some were designed for function over style in order to ensure that the ink remained in its container no matter how arduous the form of travel, some were made from precious metals and exotic materials to reflect the social status of the owner, and some were designed primarily as a novelty, with any concern over potential ink leakage taking a backseat to the creativity of the design.

These novelty travelling inkwells would often be purchased to be given as gifts, or picked up as a souvenir during one's travels. We've all been in that situation while vacationing, not knowing what to pick up for our loved ones back home - "What should we get for Aunt Harriet? She's impossible to buy for!" "Well, she likes hats so let's get her an inkwell that looks like a hat box!".

Maybe the conversations didn't always go exactly like that, but there was an almost endless variety of figural inkwells made, and fortunately many have survived in spite of their somewhat inferior quality.

Regardless of the exterior shape of the figural travelling inkwell, most of them are very similar in terms of their inner workings and how they were made.

A pressure clip is pushed to open the inkwell's outer case, which then reveals an inner casing consisting of a secondary hinged lid as well as another pressure clip that holds it in place.

The glass inkwell is revealed once this secondary lid is opened. The inside of the inner lid would normally be lined in either leather or cork so that a reasonably good seal is formed with the glass bottle when closed. The casing and most of the fittings were made from brass and formed into a wide variety of shapes.

Various types of leather were used to cover the outer casings, including shagreen and snake skin.


Here are a couple of other figural inkwells in my collection... 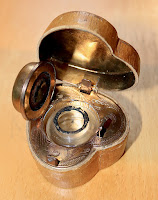