My Wonderment at One Derwent

During a visit to our daughter's home in England a few years ago I was able to convince everyone that we should take a day to make a short pilgrimage to the Derwent Pencil Museum, located in the beautiful market town of Keswick in Cumbria. Of course, everyone readily agreed (who wouldn't want to spend a day at a pencil museum!), so off we went... (at least that's the level of enthusiasm that I recall...)

While my pencil collecting interests are primarily in the realm of 19th century mechanical pencils, I had still wanted to visit this museum for some time to learn more about the graphite (wad) industry in the UK, which dates back to the early 16th century (Borrowdale Mine), as well as the history of pencil-making in the Keswick area, which began in the 1830's.

The museum is small, but quite fascinating, and I would highly recommend a visit to anyone passing through that part of England, or that has even a marginal interest in the history of pencils, pencil manufacturing, and graphite mining.

One particular display that caught my attention described the secret map pencils of World War II. I had never heard of these prior to visiting the museum and I found the backstory fascinating... 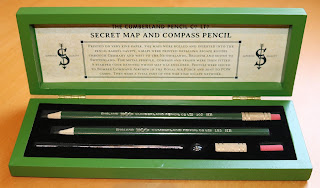 In 1942 the Derwent Cumberland Pencil Company received a visitor from the British Ministry of Supply with a special top secret request - to manufacture pencils that to all appearances were identical to other pencils, but would contain an escape map and a compass.

These were to be provided to RAF pilots and crew to assist in their escape should they be shot down over enemy territory. As it turns out, the special visitor was Charles Fraser Smith, the creative inventor of all kinds of speciality gizmos and gadgets for MI6 and MI9, which he called "Q" devices. He also worked with Ian Fleming, and he is believed to have been the inspiration for the "Q" character in Fleming's James Bond stories. 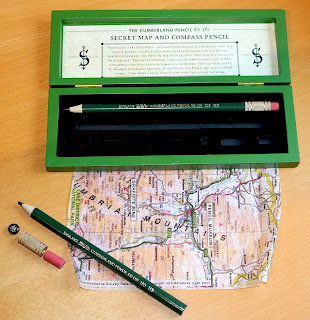 To help ensure that the secret pencils remained a secret, only a few members of the management team were involved in their manufacture, and production of these was done after all the regular staff had gone home. There were 4 different coded pencils made, each with a different escape map. They were all painted green; the only war-era pencils to be painted at all as all paint had been requisitioned for the war effort.

It is unknown how many of these pencils were made, and after the war items such as this were recalled by the War Department and most were destroyed, including any original design diagrams that explained how they were to be made.

The Pencil Museum recently released a reproduction of the secret map pencil and being a sucker for interesting pencil stories, I immediately snapped one up. The "escape map" included in the reproduction set is actually a map of the area around the Pencil Museum.

It is believed that very few of the original World War II map pencils still exist other than those in the Pencil Museum, so if you have one of these lying about from the Second World War that you'd like to get rid of, call me!

And Here's To You Mr. Robertson

We'd like to know a little bit about you for our files...

From a collector's perspective, purchasing items that are engraved is generally considered a no-no, as engravings often reduce the value of the item, sometimes significantly. However, there are times when an engraved item catches one's eye and capture's one's imagination.

Such was the case when I first acquired this "traveller" combo writing implement. While not marked as a Mordan, it is identical to others made by Mordan and Co.  and is quite likely a custom piece made by them. 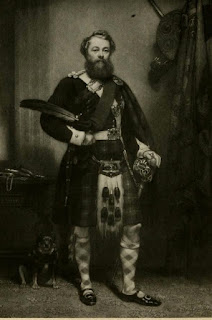 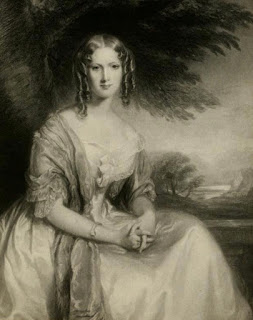 George Murray (1814-1864) became the 6th Duke of Atholl in 1846. During his period as Duke, his preference was to use the spelling Athole, rather than Atholl. His wife was Anne Murray, Duchess of Athole, born Anne Home-Drummond (1814-1897). In 1863, the Duke became ill (neck cancer) and died in January 1864, his wife now becoming the Duchess Dowager of Athole. The Duchess Dowager was a very close friend of Queen Victoria, and she served the Queen as "Lady of the Bedchamber" for almost 40 years.

Their son, John Murray, assumed the title of 7th Duke of Atholl following his father's death, and the Duchess Dowager was given until Whitsunday, 1864 to move to what would be her new permanent residence in Dunkeld. Whitsunday is the name used by Methodists and Anglicans for Pentecost, the 7th Sunday after Easter.  In 1864, Whitsunday was May 15.

From the various clues provided by the history of the Duke and Duchess as well as by the inscription on the item itself, the belief is that this combo is likely one of several that were custom ordered by the Duchess Dowager, and given as a"thank you" gift as she departed the estate in May, 1864. It would have been a relatively expensive item at the time and as such only given to the more senior staff members. As a custom piece, the maker's name may have been left off in order to allow sufficient room for the lengthy inscription. 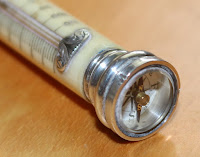 Writing implements such as this were referred to as "travellers" for rather obvious reasons as they included a pencil, dip pen, thermometer, and a compass in the finial. It is a fairly rare item, and it is even rarer to find one with the mercury thermometer not only intact, but actually still working. It is 4.25" (10.5 cm) in length when closed, and just under 5.25" (13 cm) when the pencil is extended. The pen nib is gold, stamped "Adamant Pointed London".

Are there other identical travellers still out there that are similarly inscribed to other members of the Duchess Dowager's household? Who knows, but that is how a simple inscription, on a rare writing implement, grabbed my attention and began my quest to find out more.

And during the entire time that I was doing the research and writing of this blog entry, Simon & Garfunkel's "Mrs. Robinson" became an earworm that I could not get rid of... and hopefully it is now stuck in your head as well... you're welcome!

One last fun fact ... Alexander Mackenzie, the 2nd Prime Minister of Canada from 1873-1878, was born in 1822 in Logierait, Scotland, a small community near Dunkeld and within the boundaries of the Atholl estate. He emigrated to Canada a few years prior to the arrival of the 6th Duke in 1846.