I almost shed a few wee happy tears yesterday when the first of my recent KB Collection auction purchases arrived, which included three musket pencils. The three were sold together as a single lot (an "all for one, one for all" kind of thing I suppose). I hadn't really intended to bid on this particular lot but one of the pencils was a design by a British maker that I had been looking for for some time. So I threw in a low ball bid... and they threw back an invoice... 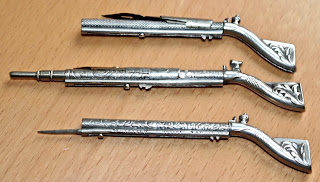 The first two pencils are unmarked and made of electroplated base metal or German silver. They would have been made as a bit of a novelty item in the mid-1800's. These two rifles each have a pencil, a toothpick, and a dip pen built into them.

After spending hours trying to find out more about Josh Baker, I had all but given up when I found an entry in "The Practical Mechanic and Engineer's Magazine" of 1842 attributing design #1166 to "Joseph Baker", not "Josh Baker". So now I have two names, Josh & Joseph. The barrel of the piece is clearly "Josh" and the design registration is clearly "Joseph". Could it be a typo in the registry, or second "Baker" that is part of the business? So far I've been unable to find out where in England they were made, or whether Baker made any other pieces. The search for clarity continues.

And now that I think about it, perhaps those weren't happy tears... my watery eyes may have been a result of having received the credit card bill for the auction purchases on the same day as the shipment of pencils ...

I suspect that few of us that are currently alive in the 21st century have received a letter or document in the mail that has been sealed by anything other than the gum on the envelope flap. The first machine made envelopes only appeared in 1845, when a patent for the mass-production of envelopes was filed by Victorian postal official Edwin Hill, and astronomer/inventor Warren De La Rue. Pre-gummed envelopes didn't make their first appearance until almost 50 years later.

Prior to pre-gummed envelopes, starting in medieval times, the wax seal was commonly used. Early on, the "wax" was a mixture of about 2/3 beeswax and 1/3 resin but the mixture gradually became mostly resin, allowing, among other things, a variety of colours to be produced. The use of wax seals significantly increased in the mid-Victorian era as the reading and writing skills of the general population also increased. An additional factor during this period was that the cost of postage was determined by both the number of pieces of paper used, and the weight, so wax seals became a common way to reduce the weight. The seals used varied from larger handheld seals, to signet rings, and even ... attached to pencils.

Here are a few examples of pencil seals...

S. Mordan Makers & Patentees - This gold pencil dates between 1837 & 1844. The intaglio seal represents a British Fox Hound carved into a white quartz capstone. The actual seal is a mere 8mm (5/16") across which shows how finely detailed some of these hand-carved seals are.


S. Mordan Makers & Patentees - This silver pencil dates between 1837 & 1844. The intaglio seal represents two hands supporting the world, carved into a quartz capstone. The seal is 8mm (5/16") across.


Once pre-gummed envelopes appeared, the use of seals quickly declined and during the 20th century they were mostly relegated to use on legal and ceremonial documents. As we continue into the 21st century there is a small resurgence in handwritten correspondence and the use of personal seals is likewise enjoying a bit of a comeback. So there is still hope that one day I'll actually receive a letter sealed with wax.