This has been one of my favourite quotes for many years now. While the quote is attributed to Louis Pasteur in 1854, I first heard it from a National Geographic photographer explaining to his audience how he managed to get this one particularly spectacular shot. For me, the quote beautifully sums up a strategy applicable to many aspects of life, including collecting!

When I first began collecting pencils, I would often purchase "lots" whenever possible, simply to expand the collection quickly. As I gained experience I quickly realized that vendors selling  multiples of an item were often cleaning out their own collections of the less desirable, or non-functioning, pencils. Since then I have generally only purchased pencils one or two at a time, and only when a good description and clear photos are provided.

However, the appeal of buying several pencils at a time is still there. Sometimes "lots" include hidden gems that the seller is unaware of and occasionally the desire to bid on a pencil "lot" bubbles to the surface when I think I see something in the photos that the seller may have missed. Such was the case recently when I purchased a "lot" of 7 pencils from an online dealer.

The description indicated that 2 of the pencils were made by S. Mordan and that attracted my attention initially.  As for the remaining 5, the description simply indicated that the makers were unknown but that they were in good condition. The photos suggested a different story, so I decided to take a gamble as the Mordans alone were worth the final price paid. Once they arrived and I was able to examine them more closely, under the loupe. I was able to confirm my initial suspicions and have now happily added  4 of the 7 to my collection...

The first of the 4 "keepers" is a very nice Mordan combination pencil/pen, full hallmarked for London, 1900.

It is in near mint, working, condition.

The second is a small silver and gold magic pencil, just 1.5" long when closed, and 3" when extended. The combination of silver & gold isn't often seen, which appealed to me, and the photos suggested that it was in excellent condition.

The excellent condition of the pencil was confirmed when received, but the more pleasant surprise was seeing that the upper barrel had been stamped "LWF & Co".

Leroy Fairchild was a 19th American pencil case maker (New York) and his pencils were generally higher quality and well made. The variety of his offerings in terms of pen and pencils was arguably as broad as that of Sampson Mordan and this is a nice addition to the variety of Fairchild pencils, combos, and figurals already in the collection.

The last two pencils also had identifying marks on them, and both are the first pencils from those makers that I have been able to acquire.

This magic pencil was made by John Knapp of New York. It is 2.75" when closed and 5" when extended.

Patent 123,485 was the specific patent that applied to the design of this pencil.


Pencil #4 is a bit of an odd duck, and likely requires more research before I can determine the actual maker with more certainty. It is a tablet style pencil; a full 6" in length. Examining the barrel under the loupe I was able to make out "Drew & Sons Piccadilly Circus W". After a bit of digging I was able to determine that John Drew founded the company in 1844, with his sons Samuel and Ernest eventually taking over. The company was known as a supplier of high-end gentleman's accessories, including items such as cigar cases, picnic baskets, flasks, luggage, and ... pen sets.

The company remained in business until the mid-1930's and was located at Piccadilly Circus from 1887 to 1914. These types of high-end retailers often had specialist firms (such as S. Mordan) manufacture the items which were then branded with their own company name (as many retailers still do today).

The remaining 3 pencils will be sold at some point (including the 2nd Mordan which was not a desirable design) and the 4 pencils now added to the collection are worth far more than the price I paid for the entire "lot".

This time, with a lot more experience, and by being cautious up front, the bulk purchase approach paid off - sometimes chance DOES favour the prepared mind...
at August 29, 2017 1 comment:

While many of the upscale Victorian pen/pencil case makers in England used silver or gold for the majority of their pen/pencil casings, these same makers regularly experimented with, and offered finished products with, cases made of other materials. One of the more peculiar casing choices used at the time was the porcupine quill. There is a species of porcupine in Africa that has quills that can be over 30 cm long (one foot+). At some point African porcupine quills found their way to Great Britain, perhaps as souvenirs, or perhaps embedded in the backside of one of Great Britain's intrepid explorers of the day. An enterprising soul eventually noticed how these quills were quite similar in size to existing pen/pencil barrels, and a new, creative option for pen/pencil case makers was "discovered"...

Two of the porcupine quill writing implements in my collection are pencils, while the third is a dip pen, and all three date to around 1880. The dip pen was made by Sampson Mordan (the sterling silver ferrule is stamped "S. Mordan & Co."). The overall length of the pen is 23 cm (9") and the quill measures a healthy 18 cm (7").

The second pencil is the rarest of the quill pencils, being a triple-barrelled slider pencil. It does not have a maker's name but is a very similar design to a 3 barrelled pencil made by Mordan.

The quills have been cemented together and the cap and pencil tip are both sterling silver.

Porcupine quills have traditionally been used for a great variety of purposes and they are still widely used (there are many sources of both North American and African porcupine quills on the internet for those in need), but as far as I have been able to determine, their use as pen/pencil case barrels was fairly short-lived. I suspect that the quills simply did not stand up to the rigours of daily use and abuse.

James Perry was a schoolmaster in Manchester during the early part of the 19th century. Around 1819 James worked out a steel pen design that provided better ink flow and flexibility than was previously available with existing steel pens. While steel pens had been around for quite some time prior to James' new pens becoming available, the quill was still the favoured writing instrument due to the frustrating limitations of the steel pens available at the time.

He initially began making these steel pens as rewards of merit for his students, and by 1824 James and his brother Stephen had started their own business making and selling steel pens. The business grew rapidly and soon their stationery and related product offerings included pens, propelling pencils, inks, inkstands, and a wide variety of other items.

Perry & Co. continued to expand, eventually having offices in London, Brussels, Amsterdam, Frankfurt, and New York. When James died in 1843, the business was carried on by Stephen. What began as the result of one person's simple desire to improve the writing experience of his students, turned into a major enterprise that ultimately lasted well into the middle of the 20th century. At one time or another Perry & Co. produced and/or sold everything from steel pens to general office supplies, and bicycle chains to actual cars.

The 1883 Perry & Co. Illustrated Price guide (available online thanks to Google) provides an amazing look at the breadth of products that Perry & Co. had on offer at the time .

The "Patent Perryian Gravitating Inkstand" appears to have first come on the market around 1842. While I haven't found the actual original "patent" for the inkstand, the first advertisement (complete with testimonials) that I found was in Bent's Literary Advertiser for January to December, 1842. 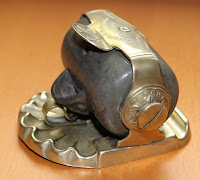 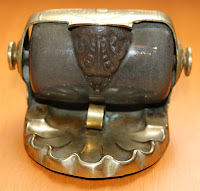 The ceramic cylinder could be filled with ink, and when not in use it could be rolled upwards and "locked" in place by a small brass wedge that slides under the cylinder. The novelty of the inkstand was that this action allowed the ink to be protected from dust and from evaporation between uses. 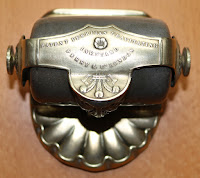 A clever design in its day, with an equally clever product name that just sort of calls out to you, and subconsciously you suddenly find yourself "needing" a Patent Perryian Gravitating Inkstand; at least that is my explanation for how this one recently became part of the collection.