They Were "A head" of Their Time

An almost infinite variety of small figural and novelty inkwells were made during the early to mid 1800's to satisfy the growing demands of the rapidly increasing new "middle class" of Victorian England. Many of the inkwells of this period had a cavity for the ink and a separate cavity (or multiple cavities) where the writing quill(s) could be stood while at rest. The shift to horizontal pen rests only became "a thing" when steel pens (nibs) began to be mass produced, as the metal tips of the pens could be damaged if left standing vertically when not is use.

Among the many novelty inkwells were "head" figurals that had a single opening for the ink cavity and then one or more quill holder holes elsewhere on the piece. Most of these inkwells were not of particularly high quality which makes their survival for almost 200 years all the more impressive!

I currently have 4 head inkwells and there are several others that I've been on the lookout for and hope to acquire at some point. 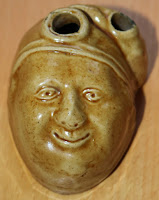 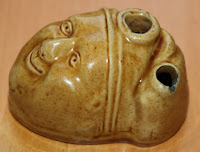 "Souter Johnnie" was a character in Robert Burns 1790 poem, Tam O'Shanter. In the poem Johnnie is Tam's drinking buddy, but the character is based upon a real "souter" (shoe maker) that Burns knew, John Davidson. Believed to be salt-glazed pottery, it is 3" long x 2" wide x 1.5" high. (c. 1840, England). 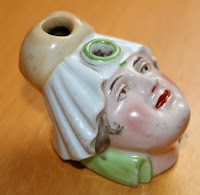 This bonneted damsel was apparently not having as good a day as Johnnie when they made her as she's a little dour looking. The top hole is for ink and the lower hole is the quill rest.  Made of porcelain in France, c. 1840. It is 2.75" long, 2.5" wide, and 1.75" high. 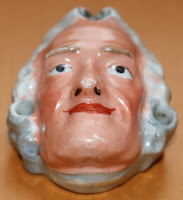 A rather self-important looking English gentleman sporting his finest wig, which includes the inkwell hole at the top and a quill holders on both sides. Made around 1830 in England. Staffordshire, or perhaps New Hall porcelain. It is 3" long x 2.5" wide x 1.75" high. 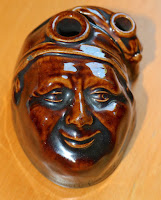 Another Souter Johnnie novelty inkwell. This one is believed to be made by Rockingham pottery, around 1840. Slightly different design and glazing than the other, and it is imprinted "Souter Johnny" on the base. It is 3.25" long x 2.25" wide x 1.5" high.