The mighty oak has been around much longer than we humans have, so as obvious as the title statement may seem, it apparently wasn't until the 14th century that someone decided that it should be recorded as a proverb. Since then we've attached a great deal of symbolism to the oak tree, and its humble beginning as a tiny acorn.

During Victorian times acorns were considered good luck charms, and also represented youthfulness, strength, and stability. Acorns were just one of many special symbols of the Victorian era that were represented in various novelty forms of the period, including pencils.

My collection includes a few lucky nuts; a tiny walnut pencil (made from an actual walnut shell), and several acorn pencils. Two of the acorn pencils stand out for a few reasons; they are gold, they have some interesting imprints, and both are exceptionally tiny as they are the size of real acorns when closed (approx. 2.5cm / 1") and just over 5 cm / 2" when extended.

The tip on this one needs to be replaced but otherwise it is in good working order in terms of extension/retraction and the lead advancement mechanism.

The second acorn is more intriguing. It is imprinted "L.W.F." for "Leroy W. Fairchild", another American maker and a contemporary of Hicks. Side by side, these two acorns appear  to be almost identical twins. The most noticeable differences are that the Fairchild barrel is a little shorter and stubbier than the Hicks, and the engraving on the cap is more detailed on the Fairchild.* 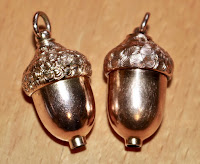 In addition to the "L.W.F." maker imprint, there is a British design lozenge indicating that the design patent was granted on the 28th day of September, 1877. So far my searches have failed to find out who the holder of that design patent was. However, the barrel is also imprinted with "Pat. Sep. 25 77", which refers to the American patent belonging to W.S. Hicks. While Fairchild was prolific in filing his own patents, he did not have one filed on that date, and both the design and patent of this pencil clearly belong to Hicks.

At this point, the information that I have on Leroy W. Fairchild is somewhat limited but my collection includes a number of other Fairchild pencils and pen/pencil combos that have patent dates imprinted on the barrels belonging to patents owned by a variety of other makers. He is the only maker I've come across that seems to have done this on a regular basis, and the logic behind it escapes me. More digging is required...

* So here's a wacky theory - if we assume that the makers used actual acorns as "models" when designing these pieces, one could surmise that the Fairchild was fashioned after the American Red Oak acorn (short & stubby) and therefore made in America and imprinted with a design lozenge for export to the UK. The more elongated one, with just the Hicks patent date on it, is of similar shape to acorns from the English Oak tree. So perhaps... this one was made in the UK (Hicks did have locations in both New York & London), for the domestic UK market. Maybe...?

** David Nishimura (Vintage Pens) kindly shared some of his expert knowledge on how the LWF imprint combined with a Hicks patent date could have occurred. Apparently, during this period, it was common for makers to license other companies' patents. David indicated that the Fairchild acorn may have been manufactured under license this way, or could even have been made by Hicks but stamped for subsequent retailing by Fairchild. Cooperation amongst competitors was common, and there is no evidence to suggest that patent infringement ever took place.