Old is Old, But Black is Gold

In a much earlier Blog entry I wrote about Charles Goodyear and a few of the pencils in my collection that had casings made from his patented vulcanized rubber (also called black hard rubber, BHR, or ebonite). One of the downsides of rubber is that it naturally oxidizes, with heat and light being the two main culprits when it comes to the oxidation of the rubber.

And for collectors like me, who prefer to have their items on display and looking much like they did when their original owners were using them, rather than hiding them away in a drawer, that means that some of these old ebonite pencils and combos eventually start looking a lot more like their current owner (grey and weathered) than they should.

I currently have over 20 BHR pencils and combos, and about half of them are looking a little rough as a result of oxidation. I recently began looking into options to revive the rubber a little and after some discussion with Mark Hoover, a fellow collector and owner of La Belle Epoque, I purchased a tube of Mark's "Restoration Balm".

I received the balm in the mail this morning and spent a couple of hours this afternoon working on two of the BHR's - a W.S. Hicks magic pencil, and a John Hoagland combo. I'll let the following images speak for themselves with regards to the effectiveness of Mark's product ... but let me just say in advance ... Thanks Mark!

John Hoagland Combo Pencil/Pen - There is no discernible maker's mark on this combo, but it does have a nice John Hoagland #4 nib. Once I cleaned up the BHR, I spent a bit of time on the gold fittings as well.

W.S. Hicks Magic Pencil - While the Hicks name is not present on this magic pencil, it does have a telltale indicator imprint - "Pat. March 21 '77", which refers to U.S. Patent 112,917 filed by William S. Hicks on March 21, 1877. Also imprinted on the barrel is a very faint A.G. Days patent date of August 10, 1858. Austin Goodyear Days patent was for “improvements” that he made to Goodyear’s 1851 patent. He was a cousin to Nelson Goodyear.

Now I just need to find the time to work on the remaining 20+ BHR's...

Ever notice how the names of some people are perfectly suited to their career or personality? Well, oddly enough there is an "apt" name for that! An aptronym, or aptonym, is a name that aptly describes the occupation or character of the person.

A few examples -
Dr. Nurse - a local medical specialist, and obviously an over-achiever
Admiral Sir Manley Power - was a Captain in the Royal Navy during WWII; but when your name is "Manley Power" you can't possibly rest on your laurels as a "lowly" Captain!
... and of course we've all heard of the famous Thomas Crapper, and what he is best remembered for!

Then there was Josiah Longmore...

Perhaps I'm "stretching" the analogy somewhat with this one and making a "bigger" deal of it than it deserves, but after acquiring my first J. Longmore pencil and digging into its origins a little, I couldn't help myself.

Josiah Longmore was a mid-1800's silversmith, with business addresses in both Birmingham and London. Josiah had one patent to his name, filed in May, 1843 (U.K. Patent No. 9719), which appears to be a mish-mash of ideas that were really several patents crammed into one. The patent statement begins with a brief description - "Certain improvements in pens, penholders, and pencil cases." Longmore then goes on to describe in detail his improvements to pens (nibs), followed by an equally lengthy description of design changes for pen holders (primarily in how the pen (nib) is to be held securely within the  barrel of the penholder).

The final section (the part I was most interested in) deals with his improvements to pencil cases and consists of three components. The first describes changes to the lead propelling portion of the pencil, and the second describes the internal changes made to allow the elongating components to function properly. The final section has me a bit intrigued, as it defines a pencil case adapted for "Hall's patent metallic memorandum books". I've yet to come across examples of either a Hall's patent metallic memorandum book, or a pencil of any make that has been made for use with such a book.
But for now let's go back to Longmore's pencil case improvements. What Longmore appears to have done was essentially invent what much later became commonly known as a "magic pencil". Magic pencils became very popular in the late 1800's and are generally described as those that extend in overall barrel length, as well as extending the writing tip, by simply holding the body of the pencil and pulling on the ring, or finial. The pencil extends "magically" in both directions at the same time, with the mechanism that performs the magic being hidden inside the barrel of the pencil. The "obelisk" example below is from the late 1800's and extends from just over 2" when closed to 4" when extended by holding the barrel and pulling on the ring top.

Longmore's invention was a slight inversion of this design, with the entire upper barrel sliding over the lower barrel (rather than sliding within the lower barrel). The "magic" of both ends extending at the same time is accomplished by pulling in one direction while holding the bottom half of the pencil.

The Mechanic's Magazine of 1846 includes a written description of "Longmore's Patent Elongating Ever-Pointed Pencil" in which they describe the convenience of a pencil that can shrink as much as two inches for carrying in one's pocket, as well as describing a couple of additional key benefits of the design - "...the objectionable external sliding ring is done away with; neither is there any slit to weaken the case, admit dirt, or cause derangement." 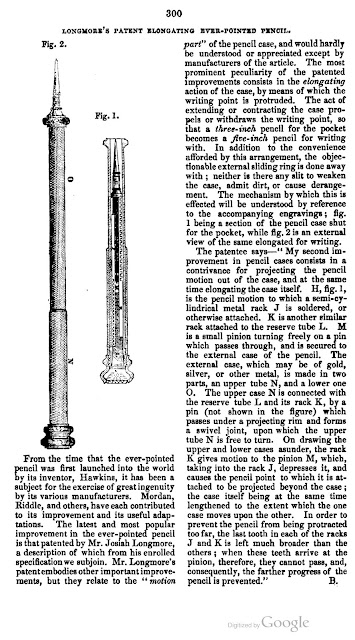 While the patent was granted in 1843, the above description first appears in 1846, which is also when the first advertisements for pencil also appear.
So all of this raises a few questions for me with regards to Josiah Longmore and his inventions. Perhaps someone reading this can shed some additional light on some of it ...


What became of Longmore and his inventions?
Is Longmore's invention the first incarnation of the magic pencil mechanisms of the late 1800's?