This Mammoth Isn't Extinct... Yet

The father of a friend of ours passed away last year, and our friend was the Executor of the estate. Over a period of several months since then he has been working his way through his dad's home and sorting through his various collections. His father was in his 90's when he passed away. He had always been an avid collector, amassing several very respectable, and valuable, collections including cameras, record albums, and currency, during his lifetime. Sadly, he was not an avid collector of antique writing equipment!

Over the winter months we'd occasionally hear an update about the latest "finds" amongst his dad's collections, as he gradually curated them and found new caretakers for them; more cameras, more albums, and more coins.

Then, a little over a month ago, I received an email from him indicating that while cleaning out his dad's office he had come across a number of pens and pencils. Was I interested in having a look? YES!

He forewarned me that most seemed to be advertising pens that his dad accumulated wherever he went - hotels, car dealerships, restaurants, etc. but that there might be a few things of interest. He had two shoe boxes full of stuff. I could go through it and make an offer if I thought there was anything of value.

There were indeed many, many, give-away pens. There were also more than a few excellent quality items in the boxes, although all but one was from the last 40 years or so. We agreed on a price for all and I was able to offset the purchase by selling off the majority of the items (yes, there are even collectors of dried up hotel ballpoint pens!).

Out of everything in the two shoe boxes, I've kept just 3 items. All 3 are in like-new, unused condition, but only one qualifies as antique, and has been added to my own collection. Finding it in amongst all of the other, much more modern, stuff was quite a surprise. It was oddly out of place, and it made my day ...

The Esterbrook Mammoth Falcon # 340 - This pen nib is HUGE! At just under 2 1/2" long, it requires its own special pen holder (also quite large). To provide a bit of scale, here it is next to a more standard size Esterbrook nib from the same period (an Esterbrook Relief #314).

The following Esterbrook advertisement from the Publisher's Trade List Annual of 1884 describes the Mammoth in detail... 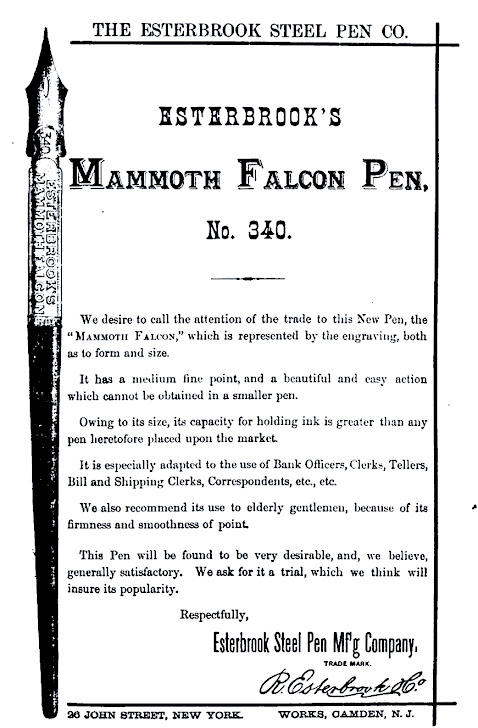 I'm not entirely sure how to interpret "We also recommend its use to elderly gentlemen, because of its firmness and smoothness of point.", but hopefully one day this particular elderly gentleman will stumble across one of the original Esterbrook Mammoth pen holders and be able to test it out!
For our friend, the true mystery remained - why would this single 140 year old unused nib appear amongst his father's office items? He had no other antique writing equipment of any sort.
From my own experience as a collector, my suspicion is that it simply fell into his lap as part of a lot while purchasing items for one of his various collections, and once in his possession he couldn't part with it. Case in point - amongst my own writing equipment collection I also have an assortment of cigarette package trading cards from the early 20th century, a victorian traveller's candle holder/light reflector, a couple of first day postal covers from the 60's, and several other odds and sods that were all acquired that way. They arrived without being specifically sought after, and so far they have refused to leave. I suspect that just like the Mammoth nib, one day these items will have my own kids scratching their heads as they try and figure out what to do with it all.
And what about the other two items that I kept? - While neither qualify to join my antique writing equipment collections, they are both welcome additions to my "why not" collection - the first is a Faber Castell e-Motion mechanical pencil from a few years back. It will be staying for at least awhile as I really like both its great design and the rich green colour. The second is a lovely LAMY 2000 fountain pen stamped W. Germany, placing its manufacture sometime prior to 1991. I know virtually nothing about fountain pens, but this is now my 4th; I'd better be careful!
Both pencil and fountain pen are unused, for now...