Hard Times In The U.S.A.

No, I'm not referring to today's situation ...

The early 1830's was a very prosperous time for America but that all changed quickly in 1837. Rising interest rates, decreasing demand for cotton, one of America's most lucrative exports at the time, and banking policies introduced by President Andrew Jackson, were among the contributing factors to the "Panic of 1837". The ensuing recession lasted until 1844. 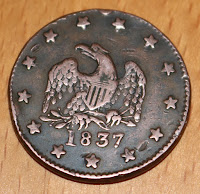 During this period some of the more successful businesses and organizations minted their own tokens that were the same size as the U.S. large one cent piece. Some of these were minted for advertising purposes and others were of a more political/satirical theme. When the "panic" was in full swing, the availability of real coins was greatly reduced and these "Hard Times Tokens" found their way into circulation and used interchangeably with real currency. 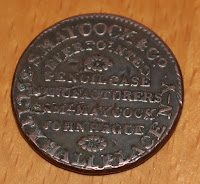 One such company that produced tokens was the pencilcase maker, S. Maycock & Co. of New York city. The obverse shows an eagle with its wings spread, holding an olive branch in one claw and an arrow in the other, surrounded by thirteen stars. The reverse is stamped "S. Maycock & Co."  "Everpointed Pencilcase Manufacturers" "35 City Hall Place, N.Y." "SML Maycock, John Hague".

I have yet to see an example of Hague's 1833 pencil patent, and even examples of the 1839 patent are extremely rare. However, the pencil gods smiled upon me one day several years ago and I was able to acquire both the above token, and an example of the 1839 pencil, on the same day, from two separate sellers.

Hague's design centred around the slider mechanism. Most mechanical pencils had a visible slot on the lower barrel through which a slider ring was pinned to the inner mechanism which in turn enabled the advancement or retraction of the pencil tip itself. Hague eliminated the slot by simply having an additional barrel that slides over the innermost barrel to extend the pencil tip.

This particular example of a Hague pencil is really just in fair condition as it has some flaws, but I happily overlook them all given the pencil's rarity, and the detailed imprint of the patent information on the barrel.