It is said that "instant success takes time", and a perfect example is the development of the "Stanhope" viewer.

The story of the stanhope begins with the 18th century British statesman and scientist, Charles Stanhope, 3rd Earl Stanhope. Among Lord Stanhope's accomplishments was the invention of a simple, small, one-piece microscope that could be handheld for up-close viewing. The Stanhope Lens became quite popular during the 19th century with a variety of applications, including medical.

The next major contributor to the stanhope viewer story was John Benjamin Dancer, maker of scientific instruments and inventor during the mid-19th century. In 1851 Dancer invented microphotography. His tiny images attracted a great deal of public interest, however, the downside was that in order to view Dancer's images one needed to own, or have access to, a microscope, which were quite an expensive item at the time.

In 1857, some of Dancer's micro images were displayed in Paris, where the French photographer and inventor René Dagron immediately saw their potential. By 1859, Dagron had come up with a modified version of the stanhope lens, with microphotographs attached directly to the viewing lens. He also obtained the first microfilm patent that year and began manufacturing a wide variety of jewellery, toys, souvenirs ... and pencils ... containing stanhope viewers and images. Dagron's Bijoux Photomicroscopiques were so popular that by 1862 he employed 150 people and his factory was producing over 12,000 units per day! The "instant success" of the stanhope was actually almost 100 years in the making.

The subject matter of the micro images covered a wide range of topics. Religious imagery was extremely popular; travel souvenir stanhopes showed photographs of towns and popular landmarks; and of course quite risqué (at the time) stanhopes were widely available among "men's accessories" as well.

Dagron's factory continued producing stanhopes using his methods right up until 1972. Although not nearly as popular as they once were, stanhopes are still being produced today. Among the wide range of options available, you can even have your own custom stanhope pencil or pen created just for you.

Here are a few examples of my stanhope pencils ...

Wooden "Spotted Egg" Stanhope Pencil - This one is from around the end of the 19th century, or very early 20th century. The "egg" is wood, with spots added for "realism". It was made as a souvenir and contains a stanhope with 4 different views of "Sudbury from the Misses Parsonson's Bazaar" in the UK. 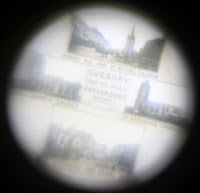 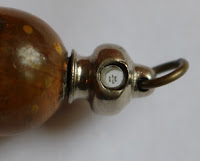 If you look closely at the image on the left you can see the actual stanhope image inside the lens. That dark little spec in the middle of the lens contains 4 individual photos plus text (the lens is just 2 mm (0.078 inches) in diameter ... in other words ... very small!). The last photo shows a portion of the actual stanhope image (it's not as blurry when viewed directly through the lens).

Metal Souvenir Stanhope Pencil - A rather plain little metal souvenir pencil from about the same period (early 20th century) showing 6 images - "A Memory of Seaton", also in the UK. 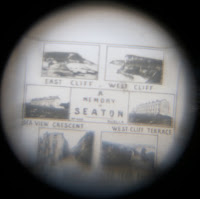 Mid-20th Century "Peep Show" Pencil - While I have yet to find any victorian era "peepers" for the collection, I do have this 'bikini model" example from the 1950s or 60's that would likely have been given out to customers in the construction business by this New Jersey contracting company. 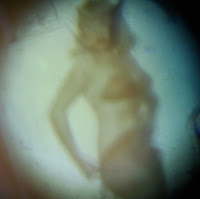 My photos of the micro images are not of the highest quality and certainly do not reflect the quality of the actual stanhopes which are generally quite clear and detailed. To properly photograph these tiny images requires much better equipment (e.g. a microscope with camera attachment) and much more time than I was prepared to invest. 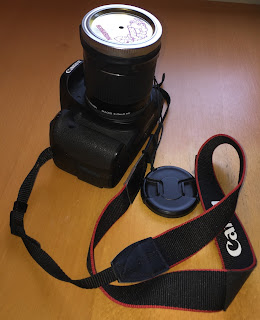 That said, I'm fairly pleased with the results given my home-made lens "adaptor" - a canning jar lid with a 2mm hole drilled through it and black electrical tape to hold it to the camera and block out extraneous light. Using this fine piece of equipment, and a somewhat steady hand to hold the stanhopes against the hole while simultaneously adjusting zoom & focus, and clicking the shutter, and ... voila! Take that René Dagron!