Bean There, Done That

Who doesn't enjoy an early morning walk on the beach, checking out what may have washed up overnight? There is often a variety of interesting items to discover, some brought to the shore from the depths of the ocean, while others may have floated in from far off lands. Back in the late 1800's one such beach curiosity, the lowly "sea bean", washed up with enough regularity along the east coast of the U.S. that it caught the eye of at least one famous pencil maker.

"Sea Bean" is a generic term for the seeds from a wide variety of tropical plant species that have adapted over time for dispersement by water. Their built-in strategy for propagation across vast ocean distances often includes a very hard exterior shell combined with an internal air pocket allowing them to float. Currents, storms, and tides take care of the rest.

Based upon information available on the amazing website "seabean.com" I was able to determine that this pencil was likely made from a seed from the "Mucuna sloanei" species, or "Brown Hamburger Bean", and it possibly originated in Jamaica before finding its way north, ultimately ending up in a pencil factory. 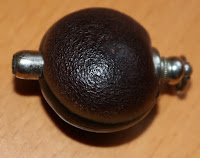 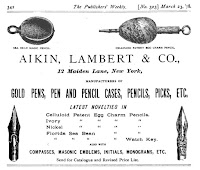 Aikin Lambert & Co. was a New York based company that made, among other things, pen holders, high quality gold pens (nibs for both pen holders & eventually fountain pens), and mechanical pencils. They became a major supplier of gold nibs to the high-end Waterman pen company, who eventually took over Aikin Lambert & Co. in the early 1900's. An advertisement for Aikin Lambert & Co in Publisher's Weekly from 1878 includes an example of the sea bean pencils that they made at the time.

The mechanism in the pencil I have is of inferior quality to most Aikin Lambert pencils I have seen, suggesting that it is unlikely this pencil was made by them. However, it is a another nice example of the wide variety of natural materials that 19th century pencil makers utilized in the production of the novelty pencils that were so in demand during that period. In addition, the advertisement, combined with the details found on the seabean.com website, have enabled me to determine the approximate age of the pencil I have, along with the type of seed that was used in making it. The pencil is fairly small, just 1.5" closed, and 2.0" fully extended.