James Watt is credited with inventing a document copying device in 1780 (although he is far more widely known for his work with steam engines). As is so often the case, necessity was the mother of invention. Watt apparently found it quite frustrating not having copies of his business correspondence unless he manually reproduced them. With this invention he was able to "automate" the process and retain his own copies of all his letters and documents.

The mid-1800's saw a significant growth in demand for copying devices and a quick scan of the catalog of the Great Exhibition of 1851 indicates that amongst the exhibitors there were more than a dozen manufacturers of copying presses, along with many suppliers of copying papers and special copying inks.

During this period, S. Mordan & Co. created a number of different styles of copying presses, including this screw press/inkstand combination, with a design registration date of March 4, 1856, registration # 3813. Interestingly, it appears that Mordan had a small "copying" problem of their own when they made these as the registration number impressed into the brass handle of the press is shown as "3183" although the design number recorded by the British Patents, Designs, and Trade Marks Office at the time was "3813".

This 1879 stationery catalog advertisement shows a near identical copying press. According to the Bank of England's Inflation Calculator, the original price of approx. ￡3 would be somewhere around￡400 ($700 CAD) in today's currency values.

In its simplest form, making a copy with a copying press consisted of taking an original document and layering it with a thin, dampened, translucent paper, then sandwiching the two sheets between two oiled sheets of paper to prevent ink bleeding, and inserting it all into the press. By using pressure some of the ink from the original would be transferred to the copy as a mirror image of the original. Hence the reason for using thin translucent paper as one would simply flip the copy over for it to be readable. This basic process upon which the Watt press was based remained in use for over 100 years. The use of copy presses began to decline in popularity as carbon paper and typewriters came onto the scene towards the end of the 19th century, although some were known to still be in use well into the 20th century.

These two pics show the internal "press" board with the brass plate that receives the outer brass screw, and the original instructions, still affixed to the underside of the press plate. 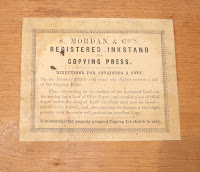 I have yet to actually try using the copying press but will eventually find the appropriate inks and papers to do so.