The Riddle of the Lund Pencil

At the beginning of the 19th century, members of the Lund family were already established in London as turners. Turning was a very skilled and well respected profession, and turners worked with a variety of materials including ivory, metals, and wood. Thomas Lund had learned the craft from his father and established his own business in 1804.  Included among the company's wide range of products were vanity boxes, chess sets, and corkscrews.

By 1835, Thomas Lund's son, William, had also established a business of his own on Fleet Street in London. William subsequently took over his father's business following Thomas' death in 1845. Around 1849/1850 William Lund began making what has become known as the "Lund" pencil. This was (and is) a pencil design that is so beautifully simple, and so perfectly functional just as it is, that it is somewhat surprising that the design seems to have completely disappeared from regular use. Lund pencils are fairly rare, and I consider myself fortunate to have a few in my collection...

The exterior of the Lund pencil casing is cut with a helical groove extending the entire length of the hollow barrel. The lead is placed into the barrel and the "propellor" (the gold ring around the middle of the casing) fits into the spiral groove and follows it, pushing the lead forward as it advances. This example is just over 13cm (5") in length, with solid gold trim pieces. Marked "Lund Patentee London".

So what was the "Riddle" behind the Lund pencil? Well it was really "who", and not "what"...

William Riddle was the son of Gabriel Riddle (London stationer, one-time partner of Sampson Mordan, and pencilcase maker). In 1848, William obtained patent # 12,383 for "Improvements in the construction of ever-pointed pencils, writing and drawing instruments, and in inkstands and ink holders". Thanks to Google Books, I was able to extract the following description of Riddle's patent from "Patents for Inventions, Abridgments of Specifications Relating to Writing Instruments and Materials, A.D. 1635-1866, London". 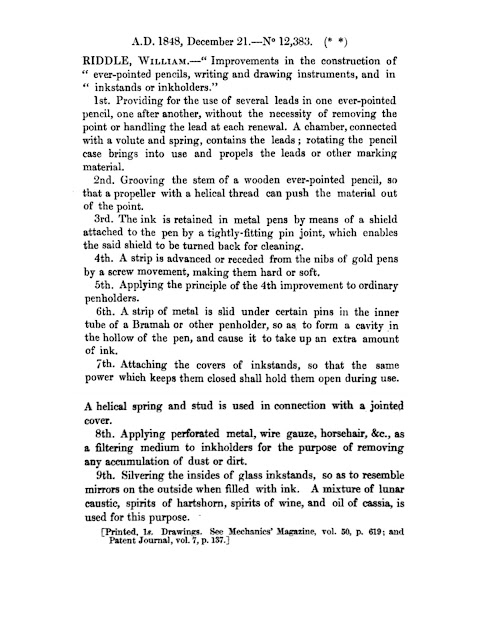 According to Ken Bull, in his book, The KB Collection of Pencils, William Riddle's pencil patent was "a subtle improvement on the simple 'Stop Sliding Pencils', first patented in 1783". Ken Bull further explains that Riddle "disposed of his interest in the patent to William Lund", and that an early version of the pencil was made of cedar, with an ivory cap & nozzle, with the barrel being imprinted "W. RIDDLE'S PATENT MADE EXCLUSIVELY BY W. LUND LONDON". It must have been quite a lengthy pencil to fit all that on the barrel!

As to why William Riddle, a successful businessman in his own right, and one with his own pencilcase making business, decided to get rid of the rights to his invention...? Well, that may be a riddle of a different sort, and as of this writing it appears to be an unsolved one...